Another disappearing act, then tacos

I seem to be very good at doing this – going missing for months without a peep.  It may be only me, but there are times where I run into a rut and remain in there for some time unable to get up again.

When I was going through my archive of pictures, my mind was already mentally kicking me telling (more like yelling way too loud) that these were posts you were going to write.  This just makes me feel guilty and I burrow further into my ditch which I’ve dug myself into.

However, after almost a YEAR of hiding, I’m coming back and picking up the pen again. 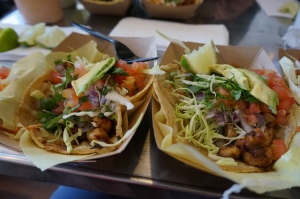 My current food craving (literally right now as I type this, this is what I am craving) is the taco.  Specifically a spicy shrimp taco with a crispy layer melted cheese on corn tortillas.  What you see here are two examples of that from Oscar’s Mexican Seafood, which have three locations.

One gorgeous afternoon, CP and I wanted to make a drive to the beach and grab lunch.  After much deliberation, I suggested we head back to Oscar’s for some tacos because what goes better than a nice, sunny day in San Diego in April?  Tacos of course!

I got two spicy shrimp and one smoked fish taco (un-pictured).  The amount of food that’s given to you is quite hefty and I left the shop lugging my happy stomach.

Each shrimp taco is filled with plump, juicy shrimps that have been marinaded and charred on the griddle.  While its vessel is being warmed up with a layer of cheese that crisps up so that you get a nice cheesy crunch.  Yes, that little bit of cabbage gives you that crunch too, but to compare cabbage to cripsy cheese sounds like an insult.

My tacos were then topped with a nice helping of habenaro salsa (me thinks they mix in some crema).  Oh man…

ALL BOARD THE FLAVOR TRAIN! IT’S PARTY TIME! CHOO CHOO!!!

Like I mentioned, they have three locations, so get your bum out to one of them, try those tacos if you haven’t already and get on this tasty party train!

This entry was posted on April 17, 2014 by May-chan. It was filed under Mexican, seafood, Taco and was tagged with Mexican, san diego, Seafood, Tacos.